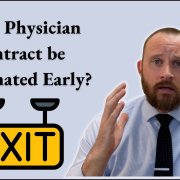 Can a physician contract can be terminated early? The short answer is yes. In 99% of physician contracts, you can terminate the agreement early. Let’s kind of hit the basics of how that happens. In any contract, there’s going to be a term ‘length’. The employment agreement lasts for one year, two years, or three years. Anything beyond that is rare. Also, more and more I find physician contracts are what we call evergreen. Meaning, there’s no fixed term. They just continue until they are terminated by one of the parties. The only way a contract could be terminated early would be if there is a fixed term. Let’s just use an example as a physician sign an employment agreement, and then it states the term of the agreement is two years.

And then in almost any contract, there will be a renewal clause that states after the initial term, the contract will then automatically renew for a one-year period, and it’s standard.  If a physician wanted to terminate the contract prior to the two-year term, they would have to follow the terms in the contract under the termination section. In the termination section, it will state all the ways that the contract can be terminated. One, if it was a two-year term and then it has automatic renewal clause, there will also be a language that states, the physician or the employer, if they intend not to renew the agreement, then they must give notice to the other party. That way if they give notice, the two-year contract just ends, and that’s it. I wouldn’t consider that early, that would just be the initial term that ends, and parties go their separate ways. There’s also an ability to terminate a contract early through mutual agreement. Maybe there’s problem between the employer and the physician, there are some cultural class clashes, personality conflicts, whatever. And they just say you know what, it’s not working out, let’s just move our own ways. Then they could just agree. Alright, here, let’s end the contract and move on.

Another way the contract can be terminated early, and this is the most common way is without cause termination. That means, either party can terminate the contract for any reason, with a certain amount of notice to the other party. The standard amount for a without cause termination notice is usually 60 to 90 days. Anything above that should be a red flag or a concern for a physician for a couple of reasons. Let’s say a contract has 180 days’ notice to terminate the contract without cause. Well, if it’s that high of a notice period, then usually that means that the employer has had a hard time retaining people. So, they’ve put in a giant notice period to kind of dissuade people from leaving. Another reason why that’s bad for a physician is, once notice is given, the relationship changes between the physician and the employer. Other blogs of interest include:

You’re no longer in the long-term plans, you’re not rowing the boat together. There can be an awkward relationship after the physician gives notice. It just changes. And the longer that the physician must stay with the employer under those circumstances, the worse it is for the physician. So, with without cause termination, ideally, it would be a shorter period. Now, there must be some notice required, once again, for a couple of reasons. As a physician, there is always continuity of care concerns. If a party could just come up and say, hey, you’re fired, don’t come back tomorrow, there must be a plan in place if a physician is leaving an employer to transition those patients to another provider, or to have to refer them out to other physicians in the area. It’s specialty dependent as well.

How to Terminate Medical Agreements

Maybe in primary care, it’s not that kind of urgent of an issue to move the patients onto someone else. But let’s say it’s in psychiatry, you have some very delicate patients. They absolutely need medications or bridge scripts where someone can take over their care. That notice period gives both parties, the physician and the employer, time to arrange the transition to others. That’s why the without cause termination is there in the first place for a physician. That’s how a contract can be terminated early. So yes, it absolutely can be terminated early. If there is no language that allows the physician to terminate the contract without cause and they must stay for a fixed term, once again, that’s an enormous red flag. In those situations, as I stated before, usually, it’s because the employers had a tough time retaining physicians and no physician wants to be in a situation where they just hate going into their job.

They don’t feel safe practicing, it’s just a bad environment and they’re stuck for a period without being able to get out of it. The only situation that requires kind of a fixed term without either party being able to terminate the agreement without cause is under a J-1 waiver employment agreement, must be three years, and in that situation, usually can only be terminated for cause. Meaning, either party breached the agreement. That’s about the only situation where a fixed term makes sense and there’s no without cause termination.

How to Accept a Physician Job Offer

How to Turn Down a Physician Job Offer
Scroll to top