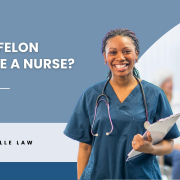 This is going to deal with people who may be thinking of going to nursing school. They might decide, alright, maybe I can get into nursing school. But will getting a license from a state be a problem down the road? I’m not going to focus on a currently licensed nurse who gets a felony. In short, if you do have a felony in your past, can it completely bar you from becoming a nurse? The short answer is no. But, it’s going to be state-specific. I’m not going to talk about one state over another. This will be a general analysis of how to determine if you can get a license or not.

First, every state is going to have different rules, unfortunately. So if you apply to one state, it might be no problem. With another, it might be a complete bar to getting licensed. Before you go into nursing school, you must think, what state do I want to end up in? Then you need to research the rules of that state to figure out what felony conviction issues there are.

Most states won’t completely bar you to license if you’ve had a past felony. But they will initiate an investigation and then investigate. What was the reason behind the conviction? That conviction is going to be a big determining factor in whether you can get licensed or not.

Enrolling in Nursing School with a Felony Record

The first thing you should probably do is call an attorney in the state you want to get licensed in who deals with nursing board issues. They’re not going to give you a “you will get licensed”, or “there’s no way” answer. But they can give you some general guidelines of what they’ve done before. The rules they’ve followed as far as felonies go. Also what you can do to put yourself in the best position to get licensed. That’s the most efficient use of your time.

You could also go on the board’s website and find out what the rules are for felonies. Some states call it a “felony bar,” so Google that. But let’s say you do apply, they run a criminal background check, and it pops up. Almost every application is going to state that if you’ve had a felony, you must disclose it. Then you’ll need to provide police records, court documents, or any documentation saying you’ve completed your sentence.

After you gather all of that, the board usually wants you to write a statement about what happened. At some point, you’ll have an interview with the board investigator. They will inquire about the reasons behind the incident. Now, some felony crimes will probably completely bar you from ever getting a license. Any kind of child abuse, sexual misconduct, and involving yourself in the distribution of prescription drug felonies are some examples. You’re going to have access to all the narcotics in the world when you’re a nurse. So if you have any convictions before with diverting or selling prescription meds, they’re going to be very concerned about that.

Criminal Records that Pose the Biggest Obstacle to Becoming a Nurse

Super violent crimes, adult abuse, or things that are difficult to rehabilitate from are the biggest problem for past felonies. If you have drugs, alcohol, or domestic violence problems, you can do anger management, Alcoholics Anonymous, Narcotics Anonymous, or counseling. Things that you can rehabilitate from are much easier to get a license after. Meanwhile, abuse, sexual misconduct, convictions involving honesty like fraud, and identity theft, are things some people won’t consider something you can rehab from.

Just to recap. First, you need to figure out what state you would like to get licensed in. Second, call an attorney in that state knowledgeable about the nursing board. Ask them, what are the laws around past felony convictions there?

There may not be a bunch of specific rules about the past. I know most boards will have specific implementations if you’re currently licensed and then get a felony. But not all the boards are going to have laws that state what’s going to happen if you’ve had a past felony. But still, talk it over. Where does the board usually look? What did they do with this type of felony in the past? If there are some steps you can take during nursing school, like either going to AA, rehab, or counseling? Things that will then set you up and put you in a better position when you ultimately apply for your license. Those are important things that you need to think about.

So, take a deep breath. If you do have a felony, it’s not going to completely bar you from being a nurse most likely. Just kind of do your research and good luck with your nursing career.

Other Blogs Of Interest

Can You Be a Nurse With a Misdemeanor?

Can you become a nurse with a misdemeanor in your past?  Two things: one, this is not state specific. This is general information about what most boards will consider. And two, applicant nurses will be the target of this post. I’m not going to talk about what happens if you’re currently a licensed nurse and get a misdemeanor. This is about people with a past misdemeanor, who are going to apply for their first LPN, RN, or CNA. Let’s talk about the application process.

Entering Nursing School With Past Record

Normally, almost any nursing board application is going to ask for any past felonies. You’ll have to disclose those. And two, this is the important language: it may ask if you’ve ever been convicted of a misdemeanor. Some will just say, have you ever been convicted of a misdemeanor involving drugs or alcohol? Each state is a little bit different. You need to look at the specific language and then determine if it’s necessary for you to disclose the misdemeanor. Now, every board is going to run a criminal background check. I find from state to state, the sensitivity of that background check varies wildly.

So, in one state, something can pop up whereas, in another, it doesn’t pop up at all. One consideration for many nurses is not having disclosed anything, say, from 25 years ago, which they should have done. Now it popped up on the background check. Then the board initiated an investigation and asked them to explain what happened and why they failed to disclose it.

One thing you could do is find an attorney in your state that handles nursing board cases. And if you’re unsure whether something qualifies for disclosure, talk to them and see if it meets the threshold. What you don’t want to do is fail to disclose something that should have been disclosed. And that could open you up to discipline. The board may decide to grant you a license. But they will still formally discipline you for failing to disclose a prior criminal incident you should’ve disclosed. That’s the first thing you need to think about. Alright, what does the application say? And then do I need to disclose it or not? Now, the next analysis is what’s the likelihood of you not getting licensed because of a past misdemeanor.

As I said, almost every board will make a nurse disclose felonies. And depending upon what it is, it could mean that a nurse will not get their license. Now, just because you’ve had a felony in your past, doesn’t mean that you won’t get your nursing license. That’s not a guarantee. It would depend upon the nature of the felony, how long ago it was, that type of thing. It’s highly unlikely that any misdemeanor in your past would prevent you entirely from obtaining a nursing license. What could prevent that would be if there are a bunch of misdemeanors. If you’ve committed various offenses in the past, it might affect whether you receive a license or not. If you’ve had one 20 years ago, when you were 19, it’s extremely unlikely that it will prevent you from obtaining a license.

There are scenarios where you have had several misdemeanors in your past. Let’s just say someone had three DUIs. Maybe 10 years ago. In that time period, the board is going to ask you questions about your use of drugs and alcohol. How much do you drink? When was the last time you were intoxicated? Did you ever go into AA? Did you ever do any kind of rehab or IOP?

They want to know if you’ve experienced brief periods of distress, which is common among people struggling with substance abuse. Or who may be experiencing other problems in their lives, such as an abusive partner or a mental health problem? Have you resolved the issues from the past, as the board will want to know? Do they believe that you pose a future risk to patient safety? It is worse for the nurse the shorter the period of time between the criminal act and the license application.

Determined to Become a Nurse?

If you’ve had three DUIs within the past year, the board will be very concerned that you have an alcohol-related problem. And they may flatly deny your application or, alternatively, offer probation while also granting you a license. And they’ll tell you, “You’ll have to do drug tests. There’ll be supervision at work. You may have to do AA or a nurse recovery group. You can’t pass narcs.” There may be restrictions on the license, but they’ll likely also grant it.

It’s rare that someone’s criminal background would completely bar them from being licensed. If you are willing to go on probation in some situations, it shouldn’t matter. Additionally, the board will consider it favorably if you clearly took some proactive measures to resolve the problems. Will a misdemeanor hurt your chances? Yes, it’ll make it harder, but it certainly is unlikely to be a complete bar for getting it.

Since we’re in Arizona, this won’t help you if you live in another state. But I believe this is sound general advice for nurses regarding what to consider if you have a criminal record. Sometimes people wanting to go to nursing school will call. They’ll say, “I don’t want to enroll in nursing school if it’s even unlikely for me to get licensed.” In that scenario, reach out to an attorney that does nursing board work in your state and ask if they have experience dealing with this type of crime. If they think it’s worth it, if it’s okay, and the likelihood of you getting a license. That’s valuable information. It would be a terrible situation to enroll in nursing school, spend all that money and time, then apply with no chance of receiving a license due to past criminal incidents. I hate for that to happen to anybody.

Letter of Intent for a Job (Is it BINDING?)

Can You Get Your Nursing License Back After Being Revoked?
Scroll to top