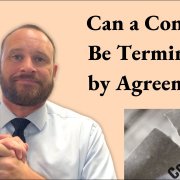 The third way is without cause termination. Either party would have the opportunity to terminate the agreement at any time, for any reason, with a certain amount of notice to the other party. Usually, an employment contract is going to be somewhere between 30 to 90 days. In that scenario, as the employee, you would just give the employer written notice, and say, I’m terminating the contract without cause, and then if it’s 60 days, you work out the 60 days, and the contract terminates. And the last way for a contract to terminate is by mutual agreement. If there is no mutual agreement listed in the contract, then theoretically, the party still should be able to say, alright, we can just wash our hands of this and move on.

If it’s not listed as one of the ways to terminate the contract, then you could just give without cause termination notice, work out your days and leave where the employer could just say, you know what? I know you must provide notice, but we’re not going to enforce that. And then you can just move on. What are some reasons for the contract by agreement? Several things like it could just be a bad cultural fit. In the interview process, although you try to get a good assessment of whether you can fit in as the employee, once you get there, it’s just not what you’re expecting. And then the employer can feel the exact same way and just say, look, it’s just not a good match. Let’s just wash your hands of the contract. We can both move on. We’re not going to require you to work anymore. Another thing that could happen is if the contract does require 60 days’ notice, and maybe even the employer doesn’t agree to mutually terminate the agreement, but they do agree to reduce the notice required. Other blogs of interest include:

For instance, kind of professionally, for most people who don’t have employment contracts, two weeks’ notice is kind of considered a normal professional amount of time to wind down and then move on. The employer in that scenario could say, well, we’re not going to require the 60 days’ notice, but we are going to require that you do at least 14 days’ notice. So, you’d have to work out the 14 days, allow us time to either find a replacement or figure out where to divert the work from that employee to someone else in that scenario. So, yes, you can mutually agree to terminate an employment agreement with the employer if the employer is willing to do so. I find it’s rare that this kind of method of termination is used.

Normally, probably like nine 9 out of 10, a contract is terminated without cause. That’s how the employment relationship would end. But certainly, if it’s not working out for both sides and you both feel like it’d be better to move on, that doesn’t happen very often. But if both parties were okay with it, then certainly yes, you could do it that way.