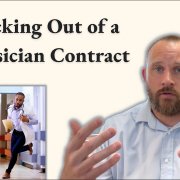 There’s always going to be a without cause termination in an agreement. It just means either party can provide a certain amount of notice, usually 60 to 90 days to the other party. If the physician is the one terminating the contract, then they would just have to work out those 60 to 90 days, then they can move on after that. And then lastly, you could have a mutual agreement where both parties just say, you know what, this isn’t working out. You don’t need to give notice. You can just pack up and move on to something better. That’s not backing out of the contract. That’s terminating the contract. In my mind, when I talk to physicians, if they have signed the contract but haven’t been at the job yet, that’s what I would consider backing out.

And so, that’s a little trickier. There are two ways. This could go, one, if the employer made the physician sign an offer letter, but the employment agreement hasn’t been signed yet by the physician, then it’s easy to back out. The physician just says I’m not interested in signing the employment agreement. And even though they sign the offer letter, it’s non-binding, unless there’s language in there that says it is binding, which is exceedingly rare. In that scenario, if you sign the offer letter, but didn’t sign the employment contract, easy, you just say, some things have changed. I’m moving on. Now, let’s say you’re PGY-2 and have this great job. They offer you a job very early on in the process, you sign the agreement, and then something changes. Other blogs of interest include:

Either there’s family problem so you can’t move to the city that you thought you would, maybe you get married, have children, or have an illness. I mean, there’s a ton of things that can happen in a year or two. And so, in that scenario, the physician must decide. Now, they cannot be forced to work, obviously. It’s not like if you sign an employment agreement, the employer can just say, no matter what, you must provide care for us. However, there are consequences for the physician potentially if they back out of an agreement. Some agreements will have direct language that states if the physician signs the agreement, but doesn’t start with the employer, there may be penalties involved.

Maybe they would have to pay back the recruitment fees or any dollars spent on credentialing or privileging, maybe they paid for their license, DEA registration, maybe they forwarded a signing bonus or a resident stipend. In those scenarios, if the physician backs out, they’re likely going to have to pay those things back. And then the other scenario is if the practice suffers damages, meaning, they were relying upon this physician to start, they had a physician ready, they invested capital, maybe build out more rooms. They could state to the physician, we did all these things, expecting you to start. You signed a contract that said you would start, and you didn’t. So, it’s possible the employer could sue the physician and come after them for those damages. Now, that’s not something that generally happens.

The best approach to take in my opinion is if you’re a physician and things have changed, you don’t like the job anymore, or whatever, you just need to approach whoever the recruiter is, the owner of the practice, the medical director, someone in a position of authority and say, these are the problems, I am not able to take this job right now. I really appreciate the opportunity, but I’d like to end this amicably and move on. And if there are one of those extenuating circumstances, I find almost all employers are going to be understanding. I mean, they’ll be disappointed most likely, but they’re not going to feel any kind of anger towards the physician. Now, if it’s a scenario where the physician just simply got a better offer and they’re leaving for purely monetary reasons, the employers may not be as forgiving in that scenario. Just saying to an employer, oh, I got a higher paying job. So, I’m leaving.

That will open them up potentially to more liability than not. Now, I wouldn’t suggest that anyone start a job if they’re not interested in being there, that’s a recipe for failure.  The physician first needs to talk to whoever the recruiter is. Second, send a letter that just states they’re not planning to start. And if they’re good personal reasons, you might want to list those out in the letter, although that’s not necessary. And then just say, hey, I want to resolve this amicably. And if you do owe them back money from the stipend or the relocation, signing bonus, or whatever, then obviously, you must pay that back. So, that’s how to back out of a physician’s contract, and differences between terminating the contract and backing out of the contract.

What is Arbitration in a Physician Contract?

How Do I Write a Notice of Termination of a Contract?
Scroll to top