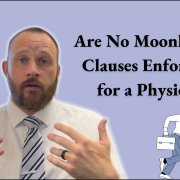 Are no moonlighting clauses for a physician enforceable by the employer? When a physician is an employee or even an independent contractor associated with an employer, there will generally be language that either prohibits or requires approval from the employer if the physician wants to do what we would call outside activities. Exclusivity is one way of referring to it. Outside activities is another way of referring to it. Moonlighting, locums, that type of thing. I’d say most contracts group into outside activities. And in that case, what that would mean is that in the agreement, it would state, if the physician wants to work for any other employer when they’re providing the practice of medicine, they must get written approval from the employer to do that for a couple of reasons. From the employer’s side of things, they don’t want their employee, the physician, to be engaging in the practice of medicine, which may interfere with their duties for the employer.

Now, if you’re a physician and you are going to moonlight or do locums or whatever on the side, that employer absolutely would provide, or at least should provide malpractice insurance for you and they would be the ones to cover the cost of that policy as well. You can get a copy of that policy and then provide that to the new employer. Most employers just simply don’t have a problem if the physician is going to work outside, as I said before, if it doesn’t interfere with their duties with that employer. Now, let’s say your primary care and then you want to work on the weekends at another primary care office, potentially building up a patient base. Then your current employer certainly may say, we don’t want you doing that because maybe if you leave, there would be anti-competitive behavior by doing that. Other blogs of interest include:

And maybe you could siphon patients away from our practice. So, no, we’re not giving you approval. You can’t do outside activities. But if maybe you’re a surgeon, let’s just say you’re a pediatric plastic surgeon working for a children’s hospital, but you also want to do some general plastic surgery on the side, maybe at a surgery center for a different employer. Usually, in that type of scenario, the employer wouldn’t care that you’re doing things on the side. If it doesn’t interfere with your general duties for your current employer. Now, are these clauses enforceable? Yes, they are. There are some states that will prohibit non-compete clauses are completely unenforceable. I’m not going to go through every state, but California, New Mexico, Massachusetts, these states prohibit the employer from putting a non-compete into the contract.

However, that does not generally apply when the person is employed. It only stops having the non-compete, which always takes effect after the contract is terminated. But there will also generally be language that says, wow, the person is employed and working for us. They cannot compete with our employers. Or the easiest way to do it is for them just to say, you must get written approval if you’re going to do any practice medicine anywhere else while you’re employed with us. In that way, there’s really no ambiguity about it. The employer then has complete control over the situation. So, if you’re a physician and you have every plan to do locums, moonlighting, whatever you want to do while you are employed, and there’s a clause in there that says, either this is your one and only exclusive job, if you want to do anything else, you must get our approval.

They absolutely can be enforced. They just can. So, you need to, in advance of signing the employment agreement, if you have either a current job that you would like to continue or maybe potentially you have a job in mind that you’d like to pick while employed. I find going through that prior to signing the employment agreement is the best way to go. Many of the contracts will have an exhibit at the end, which then lists all the outside activities that are pre-approved by the employer. I certainly would state that the physician should do that. They need to disclose. What happens if you don’t disclose outside employment? Well, you’re in breach of contract. If you sign an agreement with outside activities clause and then you start doing outside activities without getting approval, you are in breach of contract, and they could potentially terminate the contract because of that.

They can generally terminate it immediately in that type of situation, or maybe they would just state, this is what your contract says, you can’t be doing these activities. We’re not going to terminate you; however, we are going to say to you, you need to stop those activities right now. So, that is moonlighting or at least a clause that states the physician can’t moonlight. Enforceable? Yes, but generally, there’s some ways of working with the employer that would allow the physician to do that.

Can a physician work locums with a full-time job? The answer to that is, yes, but it’s going to depend upon the wording in the contract. Most employment contracts will contain language about either exclusivity or many times, it’s also called outside activities. And in those sections, it will state that the physician can only work and provide physician services to that employer unless the employer gives them specific written approval to pursue another job opportunity on their off time. This is specialty-dependent, but it is possible, but you can’t just do it on your own normally. Now, people who do shift work like ED, hospitalists, maybe some people who are doing critical care and they’re only working a certain number of shifts per month.

And then they have 12 to 16 shifts as a normal range for most people who are doing those types of shifts. So, they have plenty of time to do locums work if they want. They could go to another hospital and staff that ED or do hospital work in the other hospital as well. Most employers don’t want them doing locums work for direct competitors. In any normal situation, the physician would then say to the employer, I have an opportunity to take a locums contract with this specific employer in this specific place, I would like your written approval. And then normally, the employer is not going to withhold that approval if it’s a reasonable request. As I said before, if it’s: hey, I want to work across the street with your direct competitor three times a month, it’s probably unlikely that the employer is going to be okay with that.

There are also some considerations in what’s the non-compete. There are many contracts that prohibit not only competition after the contract ends, but during the contract as well. So, can physicians work locums with a full-time job? Absolutely, but it’s specialty dependent and they need to get written approval to do so. I have had people say, well, do I really have to do this? And then what are the repercussions if I do this without seeking approval first? Well, if it’s in the contract and it states you need to do this, meaning, get approval to work in any kind of outside employment, and you don’t do that, then it’s a breach of contract. The employer can say, look, you signed an agreement that said you had to do this, and you didn’t do it.

You’re a breach of contract and we’re going to terminate you for cause. That’s one repercussion. Why do employers do this? Well, beyond the competition portion of it, they will also generally require that the physician provide proof of malpractice insurance. A malpractice policy only covers the physician services for a specific employer. Just because the physician has a malpractice policy with their employer doesn’t mean that it covers them for doing services for another employer. Normally, their current employer would state, yes, you can do this job, but you must provide us with proof that you have a malpractice policy that covers your services provided for them for a period. So, yes, you can work as a locum, but you need approval for the most part.

What is a Physician Non-Solicitation Agreement?
Scroll to top