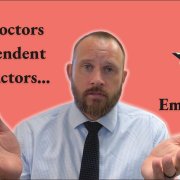 They’ll also receive paid time off. All the normal benefits that would go along with being an employee, anyone who signed an employment agreement would normally get. The salary structure, usually, would be or could be a base salary, it could be based on net collections, it could be based on RVU, it could be a combination of all three. It just depends. But in a normal situation, if you’re joining a hospital, you’re joining a physician-owned practice, healthcare network, you’re almost always going to be an employee. Let’s take anesthesiologists for instance. Maybe they’re moonlighting on the side, working infrequently for a group, they signed an independent contractor agreement. And so, the difference for that will be, instead of receiving a W-2 at the end of the year, the physician would receive 1099. In that scenario, no taxes will be taken out of whatever they earned. They just get a check, then they’re responsible to pay the taxes to the state. If you’re in a state that has that, then obviously, the federal government as well. In an independent contractor agreement, normally, the physician is going to have to pay for their own licensing, DEA registration, they won’t get time off, and they won’t receive any benefits at all.

The benefit to the physician of utilizing the independent contractor agreement is usually the compensation is a little bit better. The percentages for net collections might be a little bit higher, the RVU thresholds might be a little bit lower, the compensation factor for the RVUs might be a little bit higher. They would normally create an LLC or something similar and then be able to deduct all of the expenses associated with their practice for that employer. They could claim the things I just talked about licensing, DEA, if they have paid for malpractice as well, any kind of business expenses, office, whatever it is, they could theoretically deduct those over time. Which one is better than another? Well, generally, at least I find the physician is going to come out ahead under an employment agreement versus an independent contractor agreement.

In some scenarios, they’re just not going to have the choice. The employer could just say you will only be an independent contractor for us. We will never issue an employment agreement to you, take it, or leave it. And in that scenario, the physician just must decide. One thing that comes up occasionally is someone who’s never been a 1099 employee before. They’ve never been an independent contractor before, they’re getting all this money from the job that they’re providing, and then at the end of the year, they think, oh man, I didn’t either budget for this or wasn’t sending in the quarterly earnings to the IRS. They get to the end of the year, and they haven’t saved all the money that they’ve made. So, absolutely make certain that if you’re working as a 1099 employee, you are budgeting, setting aside whatever amount is necessary to pay the taxes.

The worst thing that could happen is to get to the end of the year, and he’s not there to pay the taxes. So, can physicians be employees or independent contractors? Certainly, they could be either one. They could be both. If they work as an employee somewhere else, moonlighting somewhere else as an independent contractor, it simply just comes down to what kind of agreement they signed. Independent contractor agreements are, in my opinion, much less complicated. Usually much shorter than employment agreements simply because they’re not going through all the benefits in those types of things that a normal employer would offer. It’s usually easier to get through an independent contractor agreement, but certainly, there are negotiating points for each one. Anyway, that’s the difference between the two.

What is Claims-Made Malpractice Insurance?

What is Special Education Law in Arizona?
Scroll to top